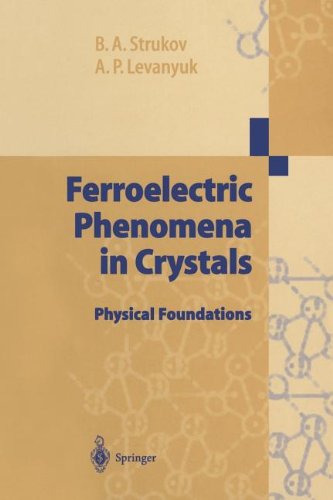 (English) The expansion of the application of ferroelectric crystals in engineering as well as of a number of fundamental problems of solid-state physics, which have not yet been solved and which bear a direct relation to ferro electricity, has lately stimulated much interest in the problem of ferroelectricity. In courses of solid-state physics ferroelectricity is studied today along with traditional disciplines, such as magnetism, superconductivity, and ‘semiconducting phe­ nomena. Moreover, new specialities have been born concerned directly with the development and utilization of ferroelectric material~ in optics, acous­ tics, computer technology, and capacitor engineering. Special courses in the physics of ferroelectrics are read in a number of colleges and universities. The study of the nature of ferro electricity has currently reached such a level of development that we may speak of having gained a rather deep insight into the physical essence of a number of phenomena, which contribute to the generation of a spontaneous electric polarization in crystals. It is exactly at this level that it has become possible to single out that part of the problem, the physical picture of which can be depicted in a rather unsophisticated manner and which is the foundation for the construction of a building of “complete understanding”.

Materials Science for the Future